on the set of Star Wars in the Sahara Desert
I’m an aspiring game artist and I graduated in July 2012 from Leeds Met University with a First Class Hons Degree in Games Design.. My dream is to become a designer in some way or another, this has lead me down many paths. From an early age i loved drawing whether it was Thunderbirds and Teenage Mutant Ninja Turtles or depicting the 12 Days of Christmas for my nan, i was always doodling. The career path I wanted to take after leaving school was Graphic Design but unfortunately after getting a very decent A Level I never pursued it into higher education.

After 6 years of me finishing college I decided it was the right time to go to university and study a design course. As I have grown up along side the evolution of video games from the mid 80′s to the present, I thought that’s what I want to do, I wanted to design video games.

At University I wanted to do more than just study Games Design and this led me to found the first ever Leeds Met Games Society (www.lmugamesoc.com) in 2010 and now its one of the most active societies in the university and has become the biggest games societies in the North of England. The Game Society has now been awarded the most prestigious prize at the Union Awards winning the Society of the Year 2012. 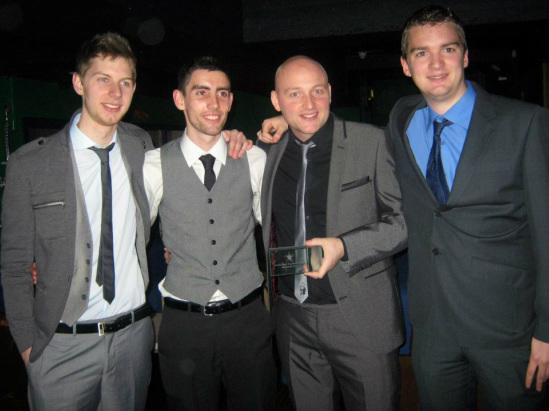 Winning Society of the Year at Awards Night 2012